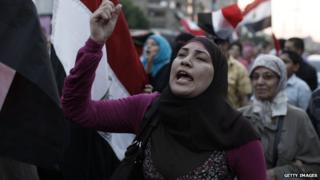 There's been another night of huge protests in Egypt to try and force the country's president, Mohammed Morsi, out of power.

Many people are unhappy with the way he is running the country.

However there have also been large rallies in support of Mohammed Morsi and 16 people are reported to have died overnight after supporters of the president clashed with protesters.

Egypt's army has set the president a deadline of this afternoon for there to be an end to the current unrest.

Otherwise the army says it will step in and take responsibility for a plan for the future of the country.

Last night the president appeared on television to say he wouldn't be told what to do by the army.

He urged protesters to remain peaceful.

In January 2011, there were massive protests against Hosni Mubarak, who had been president of Egypt for 30 years. People unhappy with the way he was running the country protested for more than two weeks.

Hundreds of people were killed as violence broke out between protestors and people supporting the government.

Eventually, Mubarak announced he was stepping down and Egyptians then voted for a new leader in the country's first ever presidential elections.