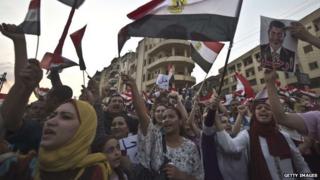 President Morsi has rejected the Egyptian army's demand to sort out the crisis in the country within 48 hours.

It follows mass demonstrations in Egypt, with thousands of people continuing to protest overnight.

President Morsi was elected one year ago but people are unhappy about the way he's running things.

The army - who helped remove Egypt's previous leader - says it'll step in if the president doesn't start listening to the people.

But President Morsi has made it clear he intends to carry on with his own plans for national peace.

A lack of jobs, as well as fears over his religious and political views, have caused the demonstrations.

Not everyone wants to see President Morsi step down. Many people still support him and want him to stay as president for his full term of four years.

Supporters of the president also plan to hold their own rallies.

In January 2011, there were massive protests against Hosni Mubarak, who had been president of Egypt for 30 years. People unhappy with the way he was running the country protested for more than two weeks.

Hundreds of people were killed as violence broke out between protestors and people supporting the government.

Eventually, Mubarak announced he was stepping down and Egyptians then voted for a new leader in the country's first ever presidential elections.