David Moyes gets to work at Manchester United 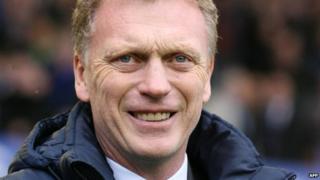 The 50-year-old arrived at United's training ground just after 8am on Monday and was snapped by photographers.

One of his first jobs will be to determine the future of Wayne Rooney.

Moyes left his club Everton to take over from Sir Alex Ferguson, who retired after more than 26 years in charge at Old Trafford.