The Newsround guide to Magic Monday at Wimbledon 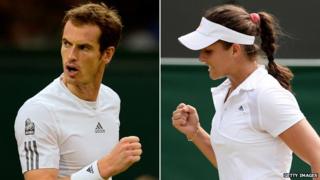 It's the seventh day of this year's Wimbledon tournament and because of the all-star line-up it's been nick-named Magic Monday.

Here's our guide on what's in store.

It's the first time in 15 years that British players have made it to both the men's and women's fourth round of the competition.

Andy Murray may have been there many times before, but for teenager Laura Robson it is her first time to get this far.

Robson will face Kaia Kanepi, who's from Estonia, on Court One at 1pm.

Murray will be taking on Russia's Mikhail Youzhny on Centre Court at 2.30pm.

The world's best players will also be battling it out today - world number one Serena Williams, from America, will take on Germany's Sabine Lisicki.

Serbia's Novak Djokovic, currently ranked as top male player in the world, will play against Tommy Haas, who is from Germany.