Which players are still in Wimbledon? 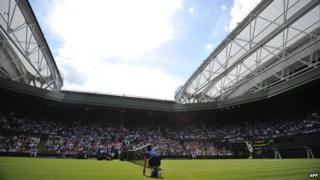 It's been a Wimbledon like no other with top players such as Rafael Nadal and Roger Federer crashing out in the early stages of the competition.

Wednesday has been quarter-finals day for the men.

On Tuesday the women played their quarter-final matches.

Sabine Lisicki, Agnieszka Radwanska, Marion Bartoli and Kirsten Flipkens all won their matches and now have places in the semi-finals.