Laura Robson battles back to make fourth round 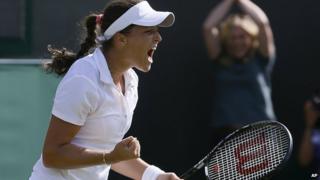 Laura Robson has become the first women to reach the fourth round of Wimbledon in 15 years.

The British number one was just a few points from defeat by New Zealand's Marina Erakovic but fought back to win the second set and the deciding third, 1-6 7-5 6-3.

The 19-year-old will play former quarter-finalist Kaia Kanepi from Estonia, on Court 1 on Monday.

It's the second time Robson has made the last 16 of a grand slam after reaching the fourth round of the US Open last year.

After the match Laura said: "I was really struggling to return her serve. I just tried to work as hard as possible and stick with it until she started to get nervous, and that's what happened.

"The crowd were amazing. I'm so so happy to get through but definitely couldn't have done it without them.

It's the first time since 1998 that there has been British players in both the men's and women's singles at the start of the second week of Wimbledon.