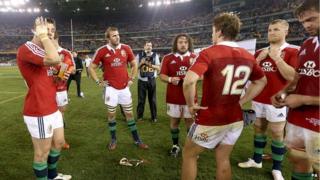 The British and Irish Lions have lost the second Test to Australia in Melbourne.

After keeping themselves ahead through a series of penalties from Lions full-back Leigh Halfpenny, they conceded a late try to lose 16-15.

The Welshman's five penalties had seen the Lions lead 15-9 until five minutes from time.

The series will now go down to a winner takes all, final-Test decider next week in Sydney.