Andy Murray into fourth round at Wimbledon 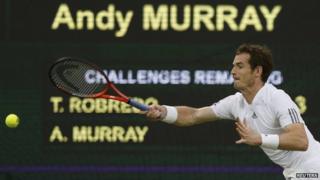 Andy Murray is into the fourth round of Wimbledon after a straight sets victory over Spain's Tommy Robredo.

Speaking after the match, Murray said: "I thought I struck the ball really well from the start of the match, I had a lot of winners and that was probably the most pleasing part.

"The third set was a tough one so I've been tested and come through it well. I hope I can keep playing better."

Murray will have the weekend off before he plays on Monday against Russia's Mikhail Youzhny.