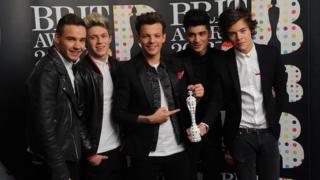 One Direction have won the best live act prize at the Silver Clef Awards.

The boy band, who were given a special global success award at the Brits this year, won a public vote beating groups including Coldplay and The Rolling Stones.

Harry Styles thanked fans and the organisers of the awards Nordoff Robbins, which is a charity.

"We are over the moon," he said. "Congratulations to Nordoff Robbins on another amazing Silver Clef Awards. What an incredible charity, helping people with music therapy."

About 26,000 votes were cast in the awards, with One Direction taking a quarter of those.