Federer beaten in second round at Wimbledon 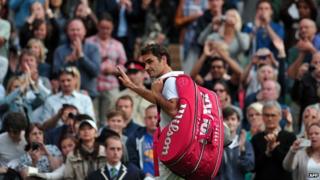 Defending champion Roger Federer has been beaten in the second round by world number 116 Sergiy Stakhovsky.

The loss is Federer's earliest defeat at Wimbledon since 2002 and ends his consecutive run of making the quarter-finals in the last 36 Grand Slams.

His defeat wasn't the only shock as former Wimbledon champions Leyton Hewitt and Maria Sharapova were beaten in their second round matches.