Andy Murray is through to the third round of Wimbledon 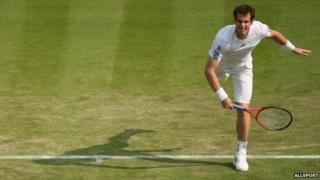 Andy Murray has made his way safely through to the third round of Wimbledon.

The British number one did not put a foot wrong as he saw off Taiwan's Yen-Hsun Lu in straight sets on Court One.

The 26-year-old will play Spanish 32nd seed Tommy Robredo in the next round.

Murray's potential quarter-final opponent Jo-Wilfried Tsonga was among the seven players who had to pull on due to injury on Wednesday.