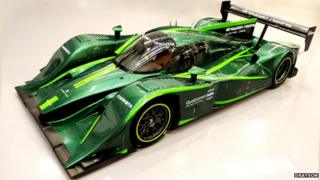 A British company has set a new world land speed record for an electric car.

Drayson Racing Technologies got their car, Lola B12, to travel at 204.2 miles per hour.

It easily broke the previous record of 175mph that was set back in 1974.

The driver of Lola B12, Lord Drayson, said he hoped the achievement would highlight the potential for electric cars to be used more in the future.

He added: "The technology that we developed for this car will filter down to the cars we use every day."