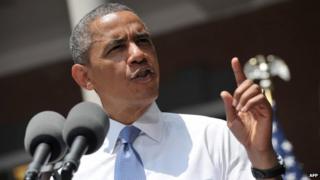 President Barack Obama has said he has a duty to children around the world to tackle climate change.

Speaking in Washington DC, Mr Obama set out his plans to cut the amount of carbon waste the US produces.

He wants to limit emissions from power plants and get other countries to agree to stricter rules as well.

Mr Obama said: "As a president, as a father and as an American, I am here to say we need to act.

"While we may not live to see the full realisation of our ambition, we will have the satisfaction of knowing that the world we leave to our children will be better off for what we did."

The president also announced plans to start more renewable energy projects and to improve flood defences in the country.

America are currently the second largest emitters of carbon in the world, behind China.

When fossil fuels like oil, gas and coal are burnt they release the gas carbon dioxide - also known as C02 - which most scientists say warms up the Earth's atmosphere, causes changes in the weather.

Not everyone agrees though. Some experts challenge these claims, saying there's not enough evidence to prove that climate change and global warming are happening.