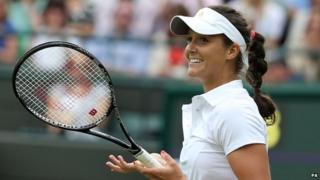 Laura Robson is through to the second round of Wimbledon, a big boost to British spirits.

The 19-year-old, ranked 38 in the world, played superbly to win 6-3 6-4 against Russian Maria Kirilenko.

After the match Robson said; "I think that was a big one for me because of all the nerves and playing in front of your home crowd at Wimbledon."

Her win now ensures Andy Murray will not be the only Briton in round two of the competition.

Heather Watson was earlier beaten by American teenager Madison Keys to become the seventh home player to lose in the first round.