Heather Watson is knocked out of Wimbledon in first round 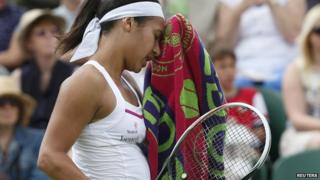 British tennis player Heather Watson has been knocked out of Wimbledon in the first round, losing against American Madison Keys.

Watson reached the third round last year, but 2013 has been a tough year for her.

After making it through to the third round at the Australian Open, she was diagnosed with glandular fever in April.

It meant she missed two months of tennis matches in the run up to the tournament.