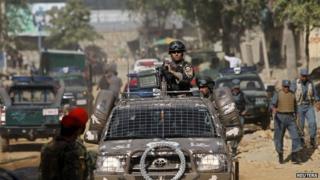 Militants have attacked the presidential palace and government buildings in the Afghan capital, Kabul.

Explosions were heard as militants clashed with security personnel at the palace's eastern gate, and two other government buildings.

The Taliban have said they carried out the assault.

The country's president, Hamid Karzai, was inside the palace when the gate came under attack.

It's the biggest security breach in the country since the Taliban were removed from power 12 years ago.

The attack comes days after the Afghan president raised objections about plans to hold US-backed peace talks with the Taliban.