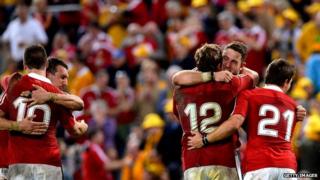 The British and Irish Lions rugby union team have won the first of three matches in their Test series against Australia, 23-21.

In a tight tense game, the Lions' Welsh players shone through as George North and Alex Cuthbert both bagged tries.

A dramatic end saw Wallabies' Kurtley Beale miss a penalty with the last kick of the game that would have meant a win for Australia.

After the match at Brisbane, the Lions are now 1-0 up in the series and a step closer to their first series victory in 16 years.

Check out our guide to the Lions