The final batch of files from the government's UFO desk, which closed in 2009, have been released.

They include a letter from a schoolgirl in Altrincham, Greater Manchester, reporting a sighting with her dad. 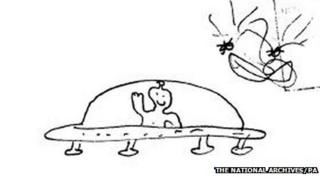 Other reports in the files include a man in Carlisle who thought he was living with an alien, and a man in Cardiff who claimed a UFO took his dog!

The Ministry of Defence shut the UFO desk to save money and because it felt none of the reports proved anything.

What would you ask an alien?

Whether or not you believe in extra-terrestrial life, we want to know what you'd ask an alien if you met one.

Perhaps you'd like to know about where they've come from, or what food they like to eat? Maybe something about their powers or abilities?

Whatever it is, send us your question now...

This chat page is now closed but you can ready some of the comments we received below.

"Are we the only other living things you have seen, or are there other people you've seen?"

"Are all aliens green, or are some different?

"What do you call UFOs?"

"Do you come here in peace, and what interests you so much in Earth? Is your planet much more advanced than ours?"

"What kind of technology do you use?"

"Are all aliens green?"

"Was broccoli never meant to be eaten?"

"I would ask them what planet do you live on? And what do you do to pass the time?"

"Do you know how to play football and what's your favourite band?"

"Can you time travel and what language do you speak?"

"I would probably ask can you eat my school instead of me?!"

"Are you close friends with E.T.?"

"Do you need any help to get back home?"

"Do you go to school and what's your favourite song?"

"What planet do you live on"?

"Will you invade Earth?"

"I would ask an alien what food does it eat?"

"What is your latest fashion in alien world?"

"I would ask an alien what its powers were?"

"What type of food do you eat?"

"Have you ever heard of Hacker and Dodge?"

"I would ask an alien, what does your spaceship or UFO run on?"

"Why are you showing yourself to humans now? Why not before in time? But are you here to take over Earth or make peace with us?"

"What language do you speak? What planet do you live on? What's your name? Age? Do you have a family? Have you ever heard of One Direction (they are great)?"

"What planet do you live on?"