Severe smog is choking the city state of Singapore in south-east Asia.

Air pollution there hit a new record high on Friday for the third day in a row - soaring way past hazardous levels.

The haze has been caused by illegal forest fires on the nearby island of Sumatra, part of Indonesia, started by farmers to clear land.

Singapore's prime minister has warned the smog could last for weeks. 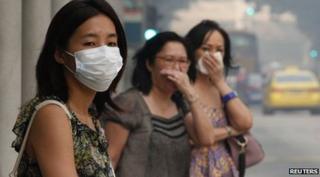 Reuters
Face masks are being worn to beat the smog

It's hard to see buildings in the thick smog, which smells of burnt wood.

People in Singapore are being advised to stay indoors if possible.

Singapore resident Nicole Wu told the BBC: "I can't even see what's happening outside my house due to the smog. You can't see birds [or] moving objects."

In bordering nation Malaysia, 300 schools have been closed.

The smog has caused tension between Singapore and Indonesia.

Indonesia has sent two helicopters with cloud seeding equipment, which can try and create rain to put out the fires.