The Voice judges will sing together in Saturday final 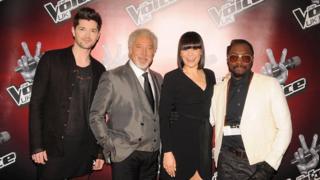 The Voice coaches may be up against each other in the show's grand final this weekend, but they'll be teaming up on stage for a sing-song.

It has been revealed that Sir Tom Jones, Jessie J, Danny O'Donoghue and Will.I.Am will be joining forces on Saturday night for a performance.

The BBC talent show's Twitter feed teased: "In other news, did we mention that our coaches are performing together on Saturday?

"They are. And one might describe the song as 'a banger'."

The judges all have a contestant they coach in the final - Leah McFall, Matt Henry, Mike Ward and Andrea Begley will be competing for the ultimate prize of a record contract in the final.