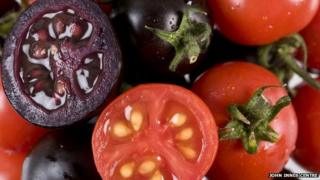 The man in charge of the government's Department for Environment, Food and Rural Affairs (Defra) says he think British farmers should be growing genetically modified (GM) crops.

GM crops are plants and vegetables that have been altered to do things they wouldn't normally do - like the purple tomatoes in the picture above.

These were invented by British scientists who say they are healthier, they last longer and taste better than normal tomatoes, but they are not available in the UK yet.

This is because the rules around GM foods are very strict in the UK, but the head of Defra, Owen Paterson wants to change that.

He is calling for the laws to be relaxed, because he thinks the UK and Europe are falling behind the rest of the world, where GM is used more widely.

But a number of campaign groups disagree with Mr Paterson, and say that GM foods should not be allowed to be grown in the UK.

Soil Association and Friends of the Earth say there are other techniques which will improve farming that can be used instead.

Some experts say that eating GM foods could have a bad long-term effect on human health, but so far there have been no proved cases of this.

Mr Paterson said that GM is even safer than conventional food' and a number of scientists agree with him, including Professor Dale Sanders, the Director of the John Innes Centre in Norwich where the purple tomatoes were developed.

He thinks GM can help fight world hunger and malnutrition and that the risks are very small.

At the moment there are no commercial GM crops grown in the UK but some cattle, sheep and pigs are often fed on GM crops that have been imported from other countries.