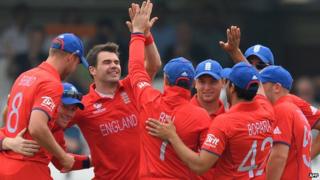 England's cricketers have made it to the final of the Champions Trophy with a huge win over South Africa, winning by seven wickets.

Alastair Cook's men won with ease after bowling South Africa out for just 175.

A calm 82 not out from Jonathan Trott made sure that England were never in trouble chasing such a low score.

They'll now face either India or Sri Lanka in the final - that match will be decided on Thursday. The final will be played at Edgbaston on Sunday 23 June.

Stuart Broad and James Tredwell starred for England's bowling attack with three wickets each, while James Anderson was on fine form with 2-14 off his eight overs.

And even though Alastair Cook was out early in England's innings, Jonathan Trott and Joe Root both played calmly to ease the hosts home with plenty of time to spare.