Daniel Radcliffe gets good reviews for Cripple of Inishmaan 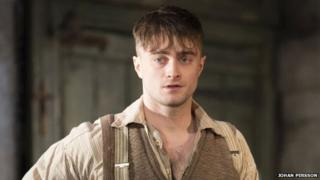 Daniel Radcliffe has impressed critics with his performance in stage play, The Cripple of Inishmaan, set in 1934.

He's mocked by his fellow islanders, but Billy's life takes an exciting turn when he lands a part in a movie.

The Guardian newspaper gave it four stars and said: "It's a knowing play but one which Radcliffe invests with a sense of real feeling."

The Independent newspaper pointed out Radcliffe "may not have the most convincing Irish accent" but praised the 23-year-old actor's "honest, sensitive, unshowy performance".

The play in showing in London at the Noel Coward Theatre until 31 August.