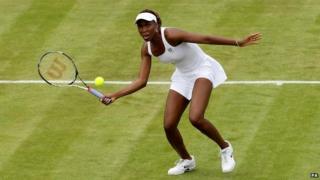 Venus Williams has been forced to pull out of Wimbledon because of a back injury.

The former world number, who's won Wimbledon five times, struggled with the injury through the clay court season.

Writing on her facebook page, she said: "I will not be able to participate in Wimbledon.

"I am extremely disappointed as I have always loved The Championships. I need to take time to let my back heal."