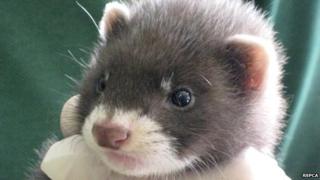 A baby polecat has been rescued by the RSPCA near Taunton in Somerset, after it became separated from its mum.

It was spotted by a member of the animal charity who found it, alone in a field, hungry and shaking.

The RSPCA said its usually best to leave young babies where they are because their mum is often nearby.

But in this case the baby polecat had clearly lost its mum and was in danger from a dog living nearby.

The baby polecat is healthy but needs constant feeding and care until he is old enough to fend for himself.

Polecats are part of the weasel family and live in woodland areas.

They nearly became extinct in the UK around 100 years ago because so many were killed by gamekeepers but numbers are now gradually increasing again.