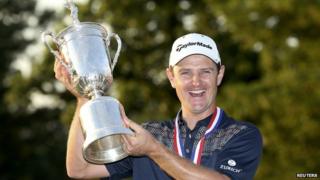 Justin Rose has become the first Englishman in 43 years to win the US Open golf championship.

Not only is he the first Englishman to win the US Open since Tony Jacklin in 1970, but the first to win any major since Nick Faldo in 1996.

Rose was born in Johannesburg in South Africa but emigrated to the UK when he was five-years-old.

He becomes the third UK winner of the title in four years, after Northern Ireland's Rory McIlroy won in 2011 and Graeme McDowell in 2010.