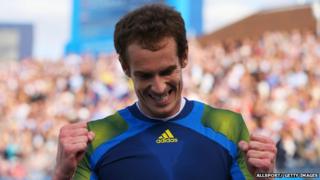 It's the third time Murray's won at Queen's and is the ideal preparation in the run-up to Wimbledon next week.

After initially taking the lead in the first set, Murray went on to lose it after slipping on the grass and falling awkwardly.

But the British number one fought back to take the second set and upped his game in the third deciding set.

Murray now has a week to get ready for Wimbledon, which starts on 24 June.

After the match, Murray said: "The most important thing next week is just to make sure I keep improving the strength of my back, make sure there's no setbacks and just keep working hard on the rehab.

"Then, when Wimbledon comes round, it's all about how you play."