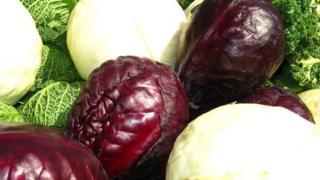 The World Cabbage Hurling Championships are being held in Lincolnshire on Sunday.

The contest's organiser claims the vegetable throwing event is the first of its kind.

Competitors have to put their cabbages in large catapult-like machines, which then propel them through the air.

In test rounds some of the veg managed to fly a massive 70 metres, but the catapults were changed to make them safer.

John Ward, who invented the cabbage throwing devices, now hopes the event will be held either annually or every other year.

He said; "Nobody is doing cabbage chucking and hurling in other places." 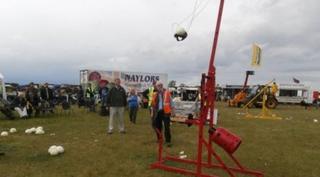 The cabbage hurlers in action

The aim of the game is to hurl the cabbages into tractor tyres laid out on a field.

Inventor John Ward said; "The idea was to have three members in a team because of having one member to load the cabbage, another to aim or line the cabbage up in the sling, with the third member to fire the trigger on the command of the controller, this being me!"

Points are awarded for each cabbage which lands in a tyre.

More points are awarded for the tyres which are further away.