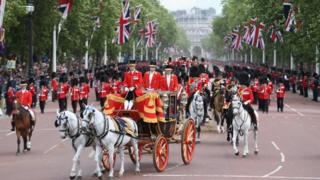 The Queen's official birthday has been marked by the Trooping the Colour ceremony in London.

Members of the Royal family were at Horse Guards Parade to watch more than a thousand soldiers and horses take part in the parade.

The Queen's husband, Prince Philip, is still in hospital recovering from an operation so wasn't able to join them.

Thousands gathered to watch the annual parade which finished with a 41-gun salute. 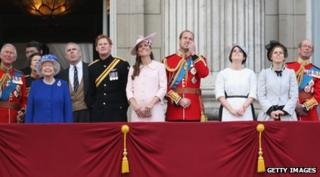 After the gun salute Prince Harry, along with other members of the royal family, stood on the balcony at Buckingham Palace to watch an RAF flypast and a display by the Red Arrows.

The Duchess of Cambridge was at the parade, which is thought to be her last public appearance before her baby is born in July.

The event, Trooping the Colour, comes from traditional preparations for battle.

The Colour paraded on Horse Guards this year was that of the 1st Battalion Welsh Guards, who recently returned from service in Afghanistan.