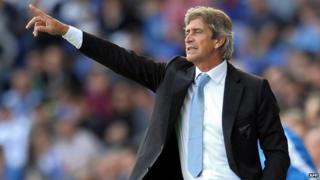 Manuel Pellegrini has been confirmed as the new manager of Manchester City.

The 59-year-old Chilean arrives from Spanish club Malaga, and has signed a three-year contract.

He takes over from Roberto Mancini who was sacked by the club's bosses in May.

Pellegrini said; "I am delighted to accept this hugely exciting opportunity."

He'll take up the new role at the end of June.