How would you stop people leaving dog poo on the street?

How often do you seen dog poo in the park?

The Dogs Trust say, for the first time in ten years, there's been a rise in the amount of dog mess on British streets.

There are around eight million dogs in the UK, and all together its thought they can make up to 1000 tonnes of waste a day.

The charity say that dog mess is one of the most common causes of complaints to local councils and four out of 10 people consider it a problem in their local area. 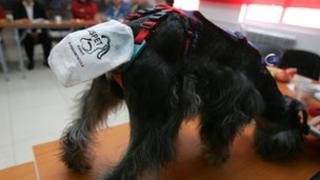 Together with Keep Britain Tidy they're launching a campaign called the Big Scoop, which they hope will persuade more owners to pick up after their pets.

Some local councils fine owners who fail to clean up their dogs waste.

Keep Britain Tidy say; "It is the the responsibility of the dog owner or the person in charge of the dog to clear up any dog foul left by their dog."

We asked for your ideas on how to combat dog mess, check some of them out below!

"I have two solutions, one is to make fines really high so people wouldn't think of leaving it on the ground and the other is I would invent a poo-remover device that would pick up poo and finish it off with a daisy smell."

"I would make a Pooper-vacuum2000 so if someone leaves the mess, a vacuum under the floor will suck it into a giant bin."

"I think that there should be a spray that you spray on the poo and it takes away the bad smell."

"I think the fines should be higher and there should be more cameras or police to catch them."

"For a school project, we had to come up with a product which will change the world. My group came up with a harness for a dog which has a bag over the dogs bum!"

"I would invent a poo-cleaner robot and have one in each local area so that when it detects poo, it will quickly go to that place and pick up the poo."

"I think that someone could invent a spray frost that makes the poop completely solid and covers the nasty smell so it makes it easier to pick up."

"I would invent a robot that you charge up to use. It would feed my dog and pick up its poop also be my handy servant."

"I would invent a special gadget that sits at the police station and automatically vanishes all dog poo."

"We have worked with the local council to put up signs in and around our area. They let dog owners know that it is a bad habit and that they could have a fine of £1000! We think that dog mess is a dirty, unhygienic and filthy problem. Would owners like to step in other dogs' mess?"