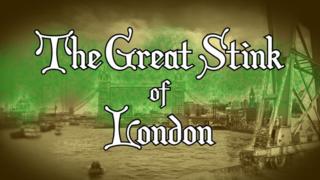 So, you go to the loo, flush it and it all goes down the drain, right? But then where does it go?

The sewers of course - but did you know who invented the UK's sewage system and why he came up with the idea?

The Great Stink of London

London used to be a really pongy place, and in one hot summer way back in 1858 it got so smelly that people now call that period the Great Stink of London!

London, like many other towns and cities had an open sewage system, which meant that if you flushed the loo - it would just run straight into the river.

Because of a population boom in the capital it led to an overwhelming amount of raw sewage polluting the open air.

Thousands of Londoners were dying of a disease called cholera, a nasty infection caused by contaminated water containing a bacteria found in poo.

At the time it was thought to be caused by the foul air so the government decided to allow work on a new sewage system.

The man in charge of this momentous task was engineer Joseph Bazalgette, and his revolutionary ideas helped shape sewage systems all over the world.

He made sure that the flow of foul water from all the old, smaller sewers and underground rivers was caught and sent along big new sewer pipes, out of the city and importantly, away from the people.

He also installed pumping stations to keep the flow moving down the pipes to a new treatment works.

They also built 1,100 miles of street sewers to feed into the big main sewage pipes.

Building London's sewers was the biggest civil engineering project in the world at the time.

Work started on this ambitious enterprise in 1859 and was virtually complete by 1868 - an incredibly fast turnaround.

To this day, those same sewers form the backbone of London's modern sewage system, even though the city's population today is nearly three times larger than it was in 1860.

The tunnels, even though many parts need updating, can still handle up to 1.8 billion litres of sewage a day.