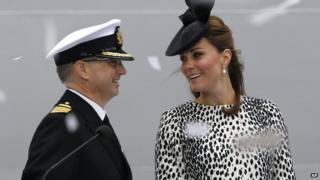 The Duchess of Cambridge has attended her last solo public engagement before her baby is due in July.

Kate went to the unveiling and naming of a new cruise ship in Southampton.

She is now officially the "godmother" of the 1000 feet long ocean liner, called the Princess Royal.

It is a tradition for the boats made by the company to be named by members of the Royal family.

In 1984 Prince William's mother, Diana, the Princess of Wales became the godmother to another one of the cruise ships.

Kate's final official engagement before giving birth is expected to be on Saturday when she attends the Trooping of the Colour with the rest of the Royal family.