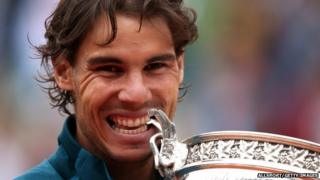 "I'm very happy, very emotional," he said. "It's a very important victory for me."

It's a winning comeback for Nadal, after he was sidelined by a serious knee injury for almost eight months.

Nadal added: "I never like to compare years, but it's true that this year means something very special for me."

The final was briefly interrupted by a protester running onto court with a lit flare, but he was quickly stopped by security.

He had been demonstrating against France's same-sex marriage law.