An ancient fossil of a tiny monkey, found in China that could be the earliest known primate.

The mouse-sized creature is the earliest known member of the order of primates, which includes humans, apes and monkeys.

It's 55 million years old, so scientists have named it Archicebus, which roughly means "ancient monkey".

They say the fossil is helping them find out more about how primates, and therefore humans, came into being.

"We are all very curious about the ancestors of primates, including those of human beings," said Dr Xijun Ni from the Chinese Academy of Sciences, Beijing, China.

"From this almost complete skeleton, we can conclude that our ancestors were a kind of very small animal. It was very active and agile; and it lived in the trees and fed on insects," he added. 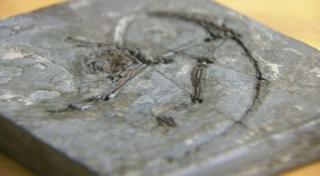 Creature of 'a jungle planet'

The Archicebus fossil is preserved across two slate slabs. Most of the animal's key bones are recorded, including very clear impressions of its legs and feet.

The tiny monkey's body was just 71mm in length and it weighed about 20-30g - less than a regular-sized bag of crisps!

Certain features of Archicebus' skeleton suggest it would have leaped from tree to tree, grasping onto branches.

Its small pointy teeth suggest that it ate insects.

And the creature's relatively large eye sockets suggest it had good vision for hunting.

Dr Henry Gee from Nature magazine said: "At this time, 55 million years ago, the Earth was a jungle planet."

"The whole Earth was covered with tropical jungle - full of trees for little scampery things to climb up and down on. It was an ideal time for primates to be evolving."