Bull stuck in a tree rescued by firefighters in Shropshire 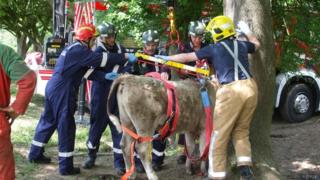 It's a firefighting cliche - the cat stuck in a tree - but what about a bull?

That's just what happened in a field in Shropshire, where a bull got its head wedged inside a tree trunk.

A gaping hole had been left in the tree after it was struck by lightning, into which the curious animal then got its head stuck.

Releasing the beast certainly wasn't an easy process - in fact, it took a team of six firefighters an hour-and-a-half.

They had to use special equipment - a big harness - which lifted the bull up gently, so he didn't get injured. 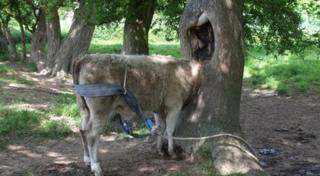 Moo-ving him was tricky...

Luckily the animal wasn't hurt and quickly ran off to be reunited with his herd.

There's less danger of this happening again as the farmer has now covered up the gap in the tree.