The helicopter powered by the mind

Imagine being able to control something with your mind - just like a Jedi Master from Star Wars.

That's exactly what's happening in America where a team of professors have developed a helicopter which is controlled by thought alone.

The controller wears a cap which sends electric currents from the brain to a computer, which then beams the commands to the helicopter.

It's hoped the tech could be developed to help people with mobility problems.

How does the technology work?

The helicopter uses an electronic system that can be 'trained' to recognise patterns in an electroencephalograph - a map of electrical activity.

Users' thoughts are then paired up with the motions of the helicopter.

So if a user thinks that they want to clench their left fist - the helicopter then moves to the left. 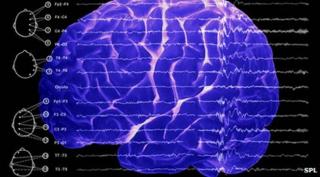 SPL
Electric currents sent from the brain control the helicopter

This process can be repeated with other thoughts so the helicopter can move in other directions: right fist, move right - and so on.

How else can the technology be used?

The technology could completely change the lives of people with physical disabilities.

The process has already been used by European researchers to make a wheelchair that can be steered by brainpower.

In 2012, Cathy Hutchinson, who is paralysed from the neck down, was able to take a sip of coffee by controlling a robotic arm using just her thoughts.

Brain signals have also been used to create a 'brain orchestra' - allowing users to change music and video in time with brain waves and heart rate. 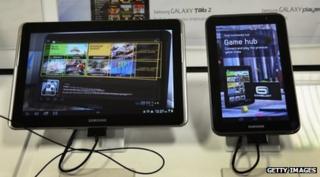 Getty Images
Imagine a tablet that you control with your mind

In the future scientists would like to use the process to enable people to undergo everyday activities, like turning on the television, with minimal effort using their minds.