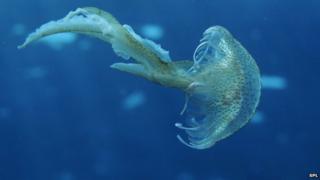 Holidaymakers heading to the Mediterranean this summer are being warned about a plague of jellyfish.

The Institute of Marine Sciences in Barcelona detected a rapid increase in one of the most venomous species, the mauve stinger.

Scientists say that overfishing has led to jellyfish numbers rising and huge banks, spanning several kilometres long have been spotted.

In some cases 30 to 40 jellyfish per square metre have been recorded.

The mauve stingers are not lethal but the sting is very painful and can leave scars.

Some Mediterranean resorts are now considering using nets to fence off safe zones for bathers.

The best protection against stings is suncream, which prevents the venom released by the tentacles from penetrating the skin.

It's also a total myth to think that weeing over a sting will stop the pain - in fact it's actually one of the worst things to do.

Urine is acidic and you actually need a liquid that's more alkaline to numb the pain.