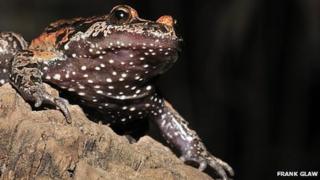 A species of frog which until recently was thought to be extinct has been reclassified as a 'living fossil'.

The painted hula frog hadn't been seen for nearly 60 years until 2011 when one was found lurking in a swamp in Israel.

Scientists found that the creature belongs to a group of animals which died out 15,000 years ago.

Even before it was declared extinct in 1996, the hula painted frog was very difficult to find.

Despite its distinctive black-and-white-spotted belly, only three adults had ever been seen.

But two years ago, the frog was spotted by a park ranger, and since then another 13 have been found.