Does it bother you when adults smoke around you? 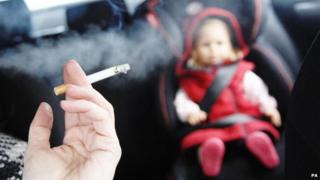 A government advertising campaign is being re-launched to remind people of the dangers of second-hand smoke.

When someone has a cigarette they inhale smoke - but this smoke is also breathed in by everyone else around them - and this is called passive smoking.

Medical research suggests the effects of passive smoking on children cost the NHS £23m a year.

It leads to 300,000 doctor visits and 9,500 hospital admissions annually and can cause breathing-related problems and other illnesses.

Public Health England - the government body responsible for encouraging healthy lifestyles - found that three-quarters of smoking parents were shocked by the statistics.

We asked you whether it bothers you when adults smoke around you.

Do you worry about the effects on your health? Or do you think it's not a problem?

"It annoys me when adults smoke because when I take my little sister to the park there are always adults smoking near it. I try to run past them so I don't have to breath it in."

"My next door neighbour smokes and his wife only allows him to smoke outside in his garden. As my bedroom is overlooking his garden whenever I open my window I only get the smell of smoke and not fresh air because he is outside all of the time. I am never going to smoke because of this annoying experience."

"It really bothers me when people nearby smoke because I have asthma so I'm scared it might affect my health. When someone is smoking nearby, I hold my breath and walk as a fast as possible to get away from them."

"I hate it when people smoke around me. It's just a dirty and horrible habit and it should make smokers feel dirty and smelly."

"It's extremely bad and can cause loads of diseases and can be bad for the environment as it is made of poisons and also it is bad for the smoker. I feel really sorry for smokers."

"Smoking is an unpleasant thing to do. I usually hold my breath while I walk past someone who's smoking."

"Smoking should be banned for ever and ever! My dad disappears into the garage to have, about 15 cigs a day. I don't like it. I hate people SMOKING!"

"It really annoys me when people smoke because it can damage their health and others as well."

"I think smoking is terrible and should be banned as it is dangerous not just to the smoker but to everyone surrounding them."

"I find it really annoying when you're trying to walk and adults just smoke in front of you as it really smells and it goes in your face."

"When I am out and there are people are smoking it bothers me a lot! I hate the smell and when it blows onto me I feel like it clings to me! It's horrible."

"You shouldn't smoke when children are around you, you could be affecting their lungs and future life!"

"There is a ban on smoking in public places but what constitutes a public place? Surely not just restaurants, pubs, transport. What could be more public than walking on the pavement? Smoking stinks, is really antisocial, the streets are filthy with butts and as an asthma sufferer it literally makes me sick. Kill smoking, not those passing by."

"I hate it when people smoke in front of me and then chuck the butts on the floor for people to tread on!"

"I hate to breathe it in it makes me cough and feel sick. It gives children the idea to smoke so stop smoking it is bad for you and your surroundings. It is bad bad bad."

"I hate when my mum smokes and I try telling her to stop but she doesn't listen to me. I don't like how it smells or what it does to your lungs. I think the factories should stop making cigarettes and shops to stop selling them."

"Yes it bothers me, I have to hold my breath until I can't smell it."

"I think it is bad because it can do harm to your body and when someone is smoking I just try to hold my breath."

"I don't mind smoking. Some of my friends smoke at school and I hang around with them, but I know that I could never smoke."

"I'm glad that my parents don't smoke because if you breathe in smoke from cigarettes it's just as bad as actually smoking!"

"It really stinks and always makes me cough. Smoking should be banned there is no positive from it except it makes money but that is a selfish reason. Also it costs the NHS money to treat diseases that were caused by smoking!!!"

''It annoys me when my dad smokes with me when we watch films and sometimes in the car.''

"I cant stand it! I don't know why anyone would want to smoke!"

"Smoking stinks, it smells and it damages your body. Why do adults do it? Especially when kids are around. When someone is smoking near me I always try not to breathe it in. I don't get what is so appealing about smoking."

"I think that smoking is terrible. You shouldn't smoke around children because they could get the wrong impression."

"When I pass someone who is smoking I have to hold my breath and that annoys me because if I don't I get a breath full of smoke and I feel like I'm choking."

"It bothers me because when my mum smokes I breathe it in which causes me to cough. I think more measures should be put in places where you can and cannot smoke."

"I don't mind because if your parents, like my dad, smoke outside it doesn't bother anyone."

"It does bother me because it smells really bad and if people are near you when they're smoking you can't help breathing it in."

"Yes, it does. It is bad for their health and children around them. It smells horrible!"

"It bothers me when I go to the park and there are lots of adults smoking. I try to walk faster to get past it quicker."