Thousands of people have had to leave their homes across parts of central Europe after massive floods.

So far at least seven people are known to have died and eight others are missing.

A state of emergency has been declared in the Czech Republic where 3,000 people have fled their homes to escape the rising water.

Check out our advice for if the news upsets you

Schools in the Czech capital, Prague, have closed and the underground system has been shut. Animals from Prague's zoo were moved to higher ground as flood waters covered parts of the site.

Main roads in many areas of central Europe have been closed and rail services cut. Thousands of homes are without power.

In Germany, more than 7,000 people have reportedly been moved from their homes in the town of Eilenburg.

And in Austria the army has been called in to help emergency services. 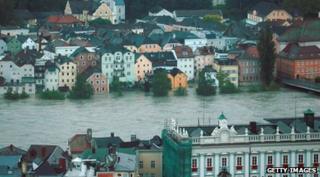