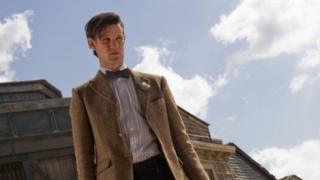 It's been announced that Matt Smith is leaving Doctor Who! Here's the full statement from the star:

"Doctor Who has been the most brilliant experience for me as an actor and a bloke, and that largely is down to the cast, crew and fans of the show. I'm incredibly grateful to all the cast and crew who work tirelessly every day, to realise all the elements of the show and deliver Doctor Who to the audience. Many of them have become good friends and I'm incredibly proud of what we have achieved over the last four years.

"Having Steven Moffat as show runner write such varied, funny, mind bending and brilliant scripts has been one of the greatest and most rewarding challenges of my career. It's been a privilege and a treat to work with Steven, he's a good friend and will continue to shape a brilliant world for the Doctor.

"The fans of Doctor Who around the world are unlike any other; they dress up, shout louder, know more about the history of the show (and speculate more about the future of the show) in a way that I've never seen before, your dedication is truly remarkable. Thank you so very much for supporting my incarnation of the Time Lord, number 11, who I might add is not done yet, I'm back for the 50th anniversary and the Christmas special!

It's been an honour to play this part, to follow the legacy of brilliant actors, and helm the Tardis for a spell with 'the ginger, the nose and the impossible one'. But when ya gotta go, ya gotta go and Trenzalore calls. Thank you guys. Matt."