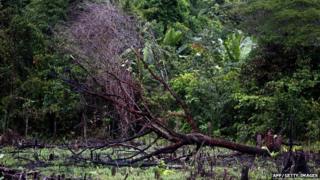 Deforestation in Brazil is causing trees to make smaller and weaker seeds, a new study suggests.

It mean it's harder for trees to grow again - a much bigger impact of deforestation than previously thought.

They found that seeds from areas of heavy destruction were much smaller than ones from areas where trees hadn't been cut down.

The scientists reckon the main reason is the loss of birds with beaks big enough to feed on the seeds and spread them around.

Birds such as the toucan disappeared when parts of the rainforest were flattened.