Heather Watson loses in first round of French Open 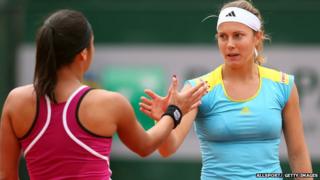 Britain's Heather Watson has been knocked out of the French Open after losing in the first round.

Watson lost the first set but fought back to win the second, but it was Voegele who upped her game in the third set, winning 4-6 6-2 4-6.

The French Open is the first tournament Heather's played since March after being diagnosed with glandular fever.

Heather Watson's defeat means there are no British players left in the singles at the French Open.