A small earthquake has struck in north Wales

A small earthquake has struck in north Wales, just after 4am on Wednesday. 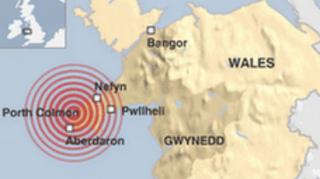 The tremor was felt in parts of north Wales and Ireland

The UK is hit by about 200 earthquakes every year - but most of them are so small, that nobody even notices them.

We asked you if you felt the earthquake. Here's a selection of your comments.

"It woke me and my Dad up and gave the dog a fright!"

"I can't believe I slept through the whole earthquake, though my family all woke up."

"Me and my family were on a holiday in Wales when the earthquake woke us up. It was the first earthquake we had been in and I was very excited but quite scared."

"My auntie is in Wales on holiday and on the phone she said it woke her up, shook her hotel room and has been awake since."

"I felt it! It terrified me, I woke up and my bed was shaking and I banged my head on the wall! OUCH! It stopped after a short while and I was fine. It was only small so nothing bad happened."

"I just went to Wales for the half term and it came to me as a shock! The walls shook and it was so freaky."

"It woke me up. I was quite scared in case it got worse."

"We didn't feel anything down here! I'm so glad that no one got hurt!"

"I don't live in Wales but I was in Wales staying my aunts and uncles and we woke up as the earthquake was going on. All the farm animals were making a lot of noise but were okay when it had stopped. I have been through earthquakes before but I didn't realise. We all made a joke about it after it had finished but while it was happening I became very scared."

"I felt scared because it happened so suddenly and all my stuff in the house started falling to the ground."

"I heard a loud noise, the windows and walls shook. Dad thought it was a jet plane going by."

"I was really scared but when I went outside everything was still standing !(:"

"Yes I felt it when I was in my bedroom when everything was shaking - I was petrified."

"I was on holiday and I thought it was just my sister messing about but my mum came down and explained what was happening so I went back to sleep."

"It woke me up! My book went skidding off my desk and I grabbed my pet cat Jubilee and we went and sat with my mum and dad in their room until it was all over! But luckily nobody got hurt!"

"I didn't feel the earthquake but my friend Aisha did (she lives in Wales) and she has been texting ever since."

"I felt the shake and I was so scared I came out of my house to see what was going on."

"My dad is a fisherman and was leaving the house this morning at 4am when the whole house shook. My Dad ran to the garden to check if the shed was still there! It was! There are 6 of us in my family, we've been awake ever since! My Dad still went on his boat!"

"We are on holiday at the moment in North Wales and the earthquake woke me and my mum up. The beds shook quite a lot and we both were scared to begin with. Now we know what an earthquake is like."

"It wasn't that scary but it was a bit freaky because the ground was shaking."

"I felt the house shake this morning, I woke up and found the windows and doors rattling, I was a little scared and excited."

"We were woken by the house shaking. Our bed moved and the roof seemed to shake. It was 4.15am."

"I felt it because I woke up. I asked my mum if she felt it and she didn't hear it. It was a little scary."

"I felt it because it woke me up. I was quite scared but I got into my Mum and Dad's bed while it passed and everything was fine."