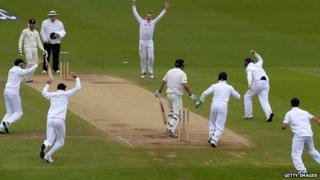 England's cricketers defied the rainy weather to beat New Zealand in the second Test at Headlingley, claiming a 2-0 series win.

The match had already lost lots of time to rain and bad light - and it looked on the last day as though Alastair Cook's men might run out of time.

England won by a massive 247 runs.

Batsman Joe Root, playing on his home ground of Headingley, scored his first Test century at the age of just 22.

A close call thanks to rain

Captain Alastair Cook had come in for some criticism as some people thought he hadn't taken the bad weather forecast into account when deciding his tactics.

When the rain stopped play before lunch it looked as though England might have wasted a golden opportunity to win the match.

But at 3pm the rain eased off and play began once more - with James Anderson claiming the wicket of Trent Boult to start the celebrations.

Then it's the big one: a five-Test Ashes series against their big rivals, Australia, which starts in July.