US trees being used for fuel in the UK

Forests of trees in the US are being chopped down and brought to the UK to burn in UK power stations for energy.

It's happening because of rules set by the European Union to increase energy made from renewable sources, in order to combat climate change.

But conservationists say this is a waste of money and wrecking forests.

In areas like the South East of America, there are plantation forests where trees are mainly grown for building materials.

The wood from the tallest and biggest trees is used for building but the smaller trees are turned into woodchip and used for energy.

The woodchip is then mixed with sawdust and turned into wood pellets, which are then shipped to the UK to be burnt in power stations to make electricity. 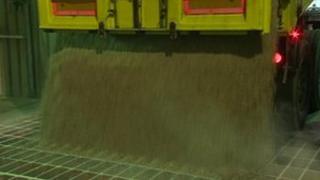 Wood from trees - rather than something like coal - is seen as a good renewable energy source as trees can be replanted again and again.

And the new trees can absorb the carbon dioxide produced from the burning.

But there's big concerns about trees in natural forests being chopped down.

Despite concerns that this will reduce the amount of natural forests, there's no sign of it slowing down.