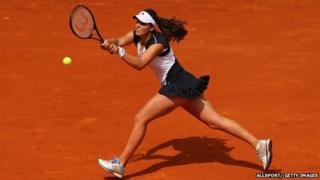 Laura Robson has lost in the first round of the French Open to Caroline Wozniacki.

The British number one, who's currently world number 37, lost in straight sets 6-3 6-2 after making too many errors.

World number 10 Wozniacki was the more aggressive player, determined not to be ousted in the first round after a disappointing start to her clay season.

Robson has never got past the first round at the French Open despite pulling off big wins at grand slams.