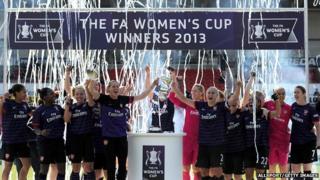 Captain Steph Houghton scored in the first two minutes and after a second goal from Jordan Nobbs, Ellen White wrapped up a 3-0 victory.

Bristol were hoping it would be a different story this year at Doncaster's Keepmoat Stadium, after they were beaten by Arsenal in the 2011 final.

Arsenal Ladies are the most successful women's club in England and have now won 39 major trophies since they were formed in 1987.