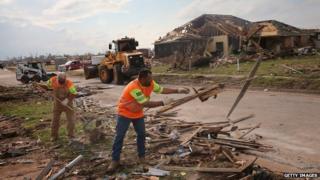 American President, Barack Obama, will visit Moore in Oklahoma after it was devastated by a huge tornado.

The President is going to meet with people who live in the city where the tornado struck.

Barack Obama has promised to help rebuild the area.

Dozens of homes were destroyed or badly damaged, according to officials and residents.

A big clean-up mission is taking place, where some have been reunited with their much loved pets who they thought had been lost.

The mayor of a town in Oklahoma has asked for a law meaning every new home in America will be re-built with a storm shelter.